This is a photo of a UN map on the wall of our home in Yanoun. I find it makes the West Bank look like an Archipelago, Archipelago Palestine.

The various colors on this map are the result of the Oslo Accords which divided the West Bank into Areas A, B, and C.

On this map the blue which covers over 62% of the West Bank is Area C.  Area C contains all of the Israeli settlements (sort of crimson color), the roads used to access the settlements, and almost all of the Jordan Valley.

According to the United Nations Office for the Coordination of Humanitarian Affairs (UN OCHA) Israeli military forces destroyed 622 Palestinian owned structures in 2011. This was a 42% increase compared to 2010.  This included 222 homes, 170 animal shelters, two class rooms and two mosques.  This resulted in almost 1,100 Palestinians, over half children being displaced because of home demolitions by Israeli forces.

Al Aqaba Women’s Centre (and temporary home of the Village Council) and kindergarten.

Most of these demolitions (90%) and most of the displacements (92%) occurred in already vulnerable farming and herding communities in Area C.  Al Aqaba has the misfortune of being part of the Jordan Valley and thus like every village in  Area C is under serious threat from what are essentially planning bi-laws.
Given normal population growth villages like Al Aqaba expand, old homes are expanded and new homes are built, institutions and infrastructure are required.  According to UN OCHA 94% of all planning requests are denied. 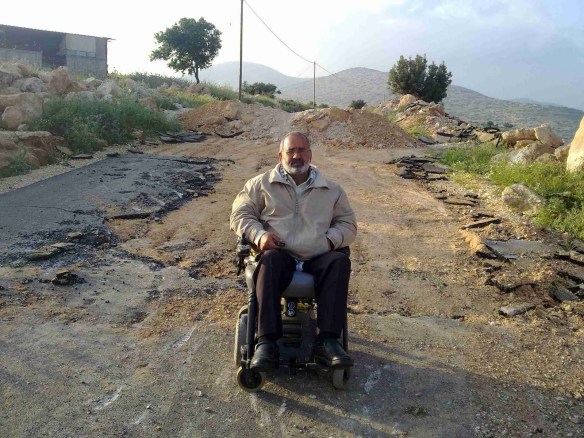 One of the wounded is Haj Sami the Mayor of Al Aquaba.  In this photo he sits on Peace Street, the black top recently removed by the Israeli Military.  Gandhi Street which sits at the other end of town also has a demolition order.
If you lived in a small town anywhere you would be lucky to have a mayor like Haj Sami.  He is an activist who works tirelessly and passionatly for the village of Al Aqaba.  Within two minutes of meeting me he asks me where I’m from.  “Canada” I say.
He looks me at me carefully and with a tone that indicates I am somehow responsible, he asks “Why has the Canadian Embassy cut off my funding for two years now.”
“I don’t know” I reply.  How would I, I wonder to myself.
“Has something changed, they always supported our village but now for two years we have been cut off” Haj Sami inquires.
I let that slide, I’m not sure I want to talk about a more conservative government in Canada, but I am reminded regularly in the villages that Canada does not support Palestine the way it used to.
So Haj Sami follows with a second question. “Will you be at your Embassy while your are here in Palestine.”
“Yes”, I reply.  “I was at the Consulate in Ramallah a few weeks ago and Mr. Greenspan suggested that I also visit the Embassy in Tel Aviv.  So yes, I do have an appointment next week.”
“Good” he say, “please ask your Embassy why they have been cut off funding to Al Aqaba for two years now.  It is very important to us.”
“Ok, I could do that” I say, as Haj Sami changes topics.
He waves a piece of paper at us.  All the text is Arabic. “12 demolition orders this time, over 20 building, and only three days to go to court” he says.  “The Army man told us – if we do not get to court within three day he will be back to destroy these homes.”  Of course the Israeli military representative means “a military court”.  All of he West Bank is occupied and Palestinians are charged before military courts.
With Haj Sami’s piece of paper, in Arabic, a local guide, and a translator we set off to find and photo graph each of these buildings.
The first of the twelve demolition orders was for a gentleman who had recently moved his family, three wives and six children, from a tent into a concrete home.  The demolition orders were for the house, animal shelters and taboon.  Our guide suggested that things like tractors and water tanks would normally be confiscated.
The following pictures give you a sense of what is to be included. 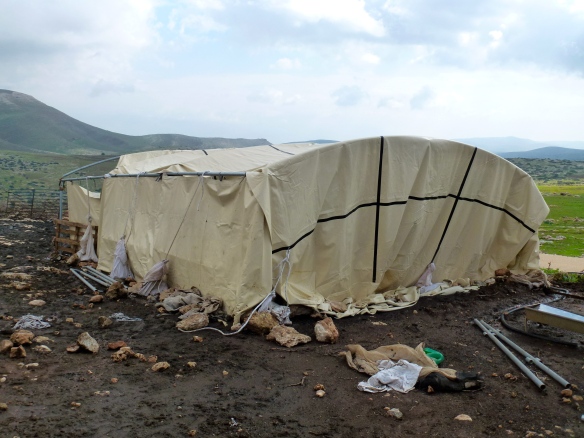 For the next hour or so Wim and I trudged though rain soaked fields and sheep shit while Israeli jets flew low overhead.  We photographed all 20 something structures at the West end of Al Aqaba.

In his earlier life Wim spent 20 years working in and for South Africa.  He is not reluctant to use words like Apartheid and Ethnic Cleansing.  From time to time he reminds me that the Occupation is simply a slow but very deliberate attempt to cleans the land of Palestinians.

Often I do not say much, both of us can live with a lot of quiet, but I find myself thinking that my tribe, the United Church of Canada doesn’t like words like Apartheid and Ethnic Cleansing in the context of Palestine / Israel.  Somehow we associate these words with name calling.

Children call names.  Maybe within my church we need to grow up a little and shoulder our responsibility to not only “seek just” but also to “resist evil”.

So you tell me.  Does this slow but very intentional attempt to gain more land with less Palestinians look like ethnic cleansing to you?

One thing is clear this family will now join the thousands of others whose lives remain at risk of displacement because of an outstanding demolition order.